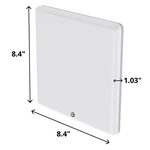 “This is a landmark approval for Energous, as it enables us to now transmit 15x more power than previously allowed without distance limitations,” said Cesar Johnston, CEO of Energous. “This achievement is the result of our long-term and continued focus on increasing both power and distance for Wireless Power Networks utilizing our advanced systems ICs.”

Analyst firm IDC projects the number of IoT devices globally to more than triple over the next three years, growing from about 12 billion devices today to almost 40 billion by 2025 and outnumbering humans by a ratio of about 5:1. Each device requires consistent and reliable levels of power to function properly and many are moving further to the edge, increasing their power demands. However, today most IoT devices are fueled by replaceable batteries — which are impacted by variables such as temperature and frequency of use — or by the power cables and cords that bring with them logistical problems and additional hidden costs to IT teams and their budgets.

Energous Corporation (Nasdaq: WATT) is leading the advancement of Wireless Power Networks to meet the growing power demands of today’s devices and tomorrow’s innovations. Its award-winning, RF-based WattUp® technology is the only solution that supports both near field and at-a-distance wireless power, enabling flexible device designs without cumbersome power cables or replaceable batteries. Energous develops silicon-based wireless power transfer (WPT) technologies and customizable reference designs for the expanding ecosystem of devices within industrial and retail IoT, smart homes, smart cities, and medical applications. The company has received the world’s first FCC Part 18 certification for at-a-distance WPT and has been awarded more than 200 patents for its WattUp® technology.