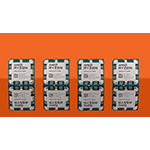 The AMD Ryzen 7000 Series Desktop Processors lineup, powered by the new “Zen 4” architecture, features up to 16 cores, 32 threads, and is built on an optimized, high-performance TSMC 5nm process node. According to AMD, the AMD Ryzen 7950X Desktop Processor enables single-core performance improvement of up to 29% and up to 15% faster gaming performance on select games. The Socket AM5 platform is designed for longevity, offering support through 2025.

These are highly anticipated products for PC builders. The new AMD Ryzen 7000 Desktop Series Processors are available at Newegg.com while supplies last.

“As a top gaming PC component retailer, Newegg is an ideal source for customers looking for the most recent in-demand CPUs and other key components. AMD Ryzen 7000 Series Desktop Processors are expected to be highly sought for years to come so we’re grateful for our partnership with AMD to be a key retail partner,” said Jim Tseng, Director of Product Management for Newegg. “The AMD Ryzen 7000 Series is part of an exciting year for anyone looking to build or upgrade a computer with newly released components.”