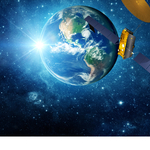 “Rocket Lab and Inmarsat Government both share a culture of innovation, pioneering technology and delivering reliable mission success, so we’re honored to be working together to support NASA in this vital project to enable major missions of the future,” said Rocket Lab founder and CEO, Peter Beck. “We look forward to building on the strong heritage of our Frontier radios by supporting Inmarsat’s world-renowned satellite network and leading capabilities providing satcom as a service.”

Steve Gizinski, President, Inmarsat Government, said, “Inmarsat Government has joined with major space-based industry suppliers to demonstrate the capabilities of Inmarsat’s ELERA global, reliable satellite network, including for NASA’s Communications Services Project and Rocket Lab is a key partner for us. Rocket Lab’s Frontier-L radio will leverage InCommand on the ELERA network as an important new capability for ubiquitous command and control to enhance the operation of low Earth orbit spacecraft. This will enable new communications services for industry and government alike.”

Inmarsat delivers world leading, innovative, advanced and exceptionally reliable global, mobile communications across the world – in the air, at sea and on land – that are enabling a new generation of commercial, government and mission-critical services. Inmarsat is powering the digitalisation of the maritime industry, making operations more efficient and safer than ever before. It is driving a new era of inflight passenger services for aviation, while ensuring that aircraft can fly with maximum efficiency and safety. Furthermore, Inmarsat is enabling the rapid expansion of the Internet of Things (IoT) and enabling the next wave of world-changing technologies that will underpin the connected society and help build a sustainable future. And now Inmarsat is developing the first-of-its-kind, multi-dimensional communications network of the future, ORCHESTRA.

In November 2021, Inmarsat and Viasat announced the planned combination of the two companies, to create a new leader in global communications.