MOUNTAIN VIEW, Calif.–(BUSINESS WIRE)–Miko, the AI robot friend loved by millions of kids worldwide, has become a streaming star. Produced by Moonbug Entertainment and available now on YouTube, Miko: The Animated Series follows six-year-old Liza and her companions Red and Blue — two robot characters based on the bestselling Miko 3 robot. 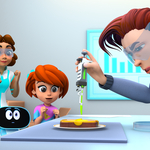 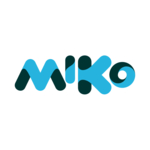 Six-year-old Liza, Red and Blue can’t help but cause crazy sci-fi chaos as they navigate the world of Miko: The Animated Series. Geared for elementary-aged kids, the series follows the trio as they battle dancing robots, race smart unicycles and have epic, futuristic adventures in the Holodeck.

“Miko’s witty, lovable personality truly comes to life in this series,” says Miko Co-Founder and CEO Sneh Vaswani. “We’re thrilled to produce it alongside Moonbug Entertainment, a partner that shares our passion for innovation in the kids entertainment space.”

The first season features 20 short, 2-minute episodes chronicling the adventures of Liza and the Mikos, kicking off with “Mecha-Miko vs. Lizilla.” New episodes will be released bi-weekly through December before picking back up in early 2023.

The series’ Red and Blue characters are based on the Miko 3 AI robot for kids, which is beloved by families in 140 countries worldwide. The kidSAFE+ COPPA certified Miko 3 robot is the recipient of the Mom’s Choice Awards, Independent Toy Awards and BlogOn Awards.

“Miko: The Animated Series brings kids into a futuristic yet relatable world, where anything is possible,” says Dan’l Hewitt, Head of Global Partnerships at Moonbug Entertainment. “We are excited for families to connect with these beloved characters and enjoy Liza, Red and Blue’s adventures through the ease and accessibility of YouTube.” Moonbug Entertainment is the creative force behind beloved kids’ series including CocoMelon and Blippi.

The launch of Miko: The Animated Series comes amid a wave of major media moves for Miko, including collaborations with the Walt Disney Company and Paramount Consumer Products.

Miko: The Animated Series is streaming now on YouTube. Miko 3 is available for purchase on www.miko.ai and Amazon.

Founded in 2015, Miko is a consumer robotics company passionate about bringing the best of technology to young learners everywhere. Home to leading educators, engineers, psychologists and content developers, Miko takes learning (and fun) to a new level with state-of-the-art artificial intelligence, robotics and IoT. The company has more than 230 employees globally and offices in the innovation hubs of Silicon Valley, London and Mumbai.