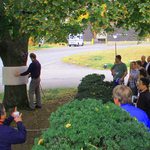 Detailed in US patent 11,408,976 and patent pending, the cloak detection technique – dubbed LPASS™ – is a new radar method that looks for tell-tale signatures of cloaked objects. that are made invisible by ‘metasurfaces’ (skins made of metamaterials), including satellites, planes, vessels, or UAV’s. At the frequencies where the cloak works, called its ‘passband’, radar tries to bounce signals back from the target but the cloak stops that reflection, and the target remains hidden. Beyond the cloak’s passband, radar transmitters are hampered by lower power limits, and thus poor at pinging cloaked targets both in and out of a cloak’s passband.

Inventor and firm CEO Nathan Cohen showed radar transmitters don’t need to transmit outside of the passband, since metasurfaces have a failure mode that produces nonlinear, heterodyned RF ‘hash’. High powered radar systems may be thwarted to detect targets that are cloaked in the passband, but their transmissions hit the target and excite this hash of heterodynes at much higher and lower frequencies where the cloak doesn’t function and the target is not hidden. On receive, a radar antenna picks up these frequencies, correlated with the transmitted signals, filters out most of the noise, and leads to a unique reflected signature of the target.

In the past, radar was considered the trump card that succeeded at target detection, a task made difficult by stealth techniques. Because they are less expensive to implement than other radar stealth methods, metasurfaces are used extensively outside of the USA, highlighting the urgent need of LPASS™ as the remedy of Pandora’s burden. Those countries that may seek a tactical advantage by retrofitting war machines with metasurfaces to hide from radar now have to face a revision to their prior assumption of hidden assets.

Cohen invented the invisibility cloak (patent 8,253,639) in 2003 and clearly saw the need to stop their destructive use, by creating LPASS™ shortly after. New patent 11,408,976 is a public message that invisibility cloaks were not invented solely to be toys of war. Metasurfaces can do more than hide objects and have many useful applications. Cohen states the firm’s recent patents on ‘fractal license plates’ for satellites (patent 11,249,178), enhanced radar road reflectors for autonomous vehicles (patents 10,901,082, 11,175,400), and smaller, wideband directional antennas (patents 10381738,11128052) are a few of many positive spinoffs of his invisibility cloak/metasurface inventions. “Metamaterials overall have a terrific future, if we encourage their use in applications which improve the human condition and that promise of tomorrow.”

Fractal Antenna Systems provides off-the-shelf and custom antenna and electromagnetic cutting edge solutions to a wide range of end markets and applications. FRACTAL has deployed tens of thousands of high-performance antennas for public safety, telecom, aviation, IoT, medical, and government/military applications, among others. For questions about FRACTAL’s capabilities, products, or custom solutions – visit FRACTAL’s website at www.fractenna.com or contact directly at [email protected].