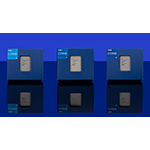 The 13th Gen Intel Core processor family – powered by Intel’s performance hybrid architecture – combines up to eight Performance cores (P-core) and up to 16 Efficient cores (E-core) in its new desktop processors. Workloads are intelligently routed by Intel Thread Director to optimize performance for modern gaming, content creation and day-to-day multitasking, according to Intel.

“The 13th Gen Intel Desktop processors have everything that PC enthusiasts want in their systems,” said Jim Tseng, Director of Product Management for Newegg. “Intel has dialed in the technology to where it offers tremendous value for a wide range of users. Our partnership with Intel has made Newegg a prime retailer for all priority Intel products.”

The six newly released 13th Gen Intel Core Desktop processors are unlocked and capable of reaching up to 5.8 GHz Max Turbo Frequency. And everyone – from beginners to enthusiasts – can get an unmatched overclocking experience with new per core tuning visualizations and easy 1-click overclocking in the Intel Extreme Tuning Utility®.

“We are elevating the standards of what a desktop can do with the 13th Gen Intel Core Processors,” said Mandy Mock, Intel Vice President and General Manager, Desktop, Workstation, and Channel Group. “Newegg is an important part of our industry-leading partner ecosystem and together we are showing the world what’s truly possible with desktop PC systems.”